Here’s another installment of Katie-got-things-accomplished-this-Christmas! I have to admit that I’ve succumbed to the time-suck that is Pinterest. I had to work the days between Christmas and New Years and quite frankly there just wasn’t a lot for this old receptionist to do. So I just browsed Pinterest for a while. Then I saw something I liked and I wanted to pin it…so I joined. 6 boards later and I can’t stop. It doesn’t help that I just got a slow cooker and recipes are rampant on there, but I digress.

I pinned this calendar project.  It jumped out at me because I have been spending an inordinate amount of time looking at paint chips at Home Depot (convenient!).  I decided since the year was ending I would need a new calendar anyway so I got shopping.  I picked up the huge frame at Goodwill for $7 (you can still see the sticker in the upper left corner), hardware for about $4 and used some silver metallic spray paint I had on hand from another project so the total cost for this project for me was $13.

I took what was already in the frame and just flipped it over.  You could cover it with paper or fabric too to change it up, but I was going for simple so I stuck with plain white.  I cut all my paint chips in half to make them closer to squares and spaced them out in an arrangement that looked pretty even.  I decided to go with a gradient, but my Pinterest mentor did hers with a coordinating color palette. I stuck the squares on with my glue gun and BAM! Calendar.

After having disassembled the frame, I took the wood out to the garage and spray painted it as evenly as possible. I let that cure during the glueing process.

Hanging it was another matter. The art that was originally in the frame hung portrait so all the hardware on it was going against me.  I picked up about $4 worth of hanging hardware from Home Depot (same trip I helped myself to the paint chips). I used painters tape as a template so I knew how far apart to nail the hooks. Pretty simple. 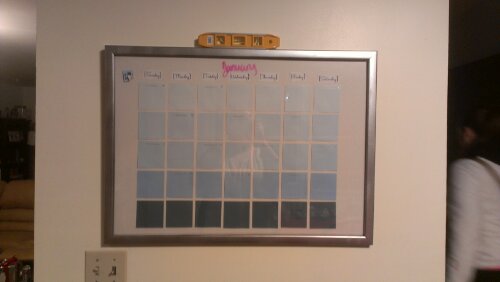 So far, we all love it. I think it turned out pretty great especially since it was a little haphazardly planned. I like the dry erase aspect of it and it’s size. Hopefully it will help with my forgetfullness.