The powder room is well under way. I don’t know why I get motivated to do one project then in the middle I feel the need to start another one. For example:

I recently finished laying the floor tile in the powder room and I even learned how to grout! (My aunt has been guiding me through this entire project so I’m also working on her schedule) Taking pictures of the smallest room in the house is really hard so bear with me.

I know it’s hard to see the difference in the pictures because the grout color seems so dark. This was taken while the grout was still wet and since it’s mostly dry now it has lightened up.  In real life, it matches the gray tones in the wall tile perfectly and ties the wall and the floor together.  Grouting wasn’t as difficult to do as I had thought. I imagined mixing up grout from a bag and having to subjectively guess what the consistency of peanut butter is.  It was a messy job and the size of the room didn’t help, but with my aunt’s guiding hand, I got the grout in.

Tonight Alex and I will be installing the toilet together which is like the blind leading the blurry, but pay that no mind!  We have been without a toilet on the first floor for too long. Installing a toilet is supposed to be really simple so I am sure with a little Youtubing and calling my dad we will be able to manage.

I’m feeling really confident with the choices I’ve made so far (vanity and sink are already picked out), but I’m not sure where to go with the paint color. I think a dark, moody greige would give it the look I want, but it’s such a tiny room with no natural light that I am afraid to go too dark. We shall see. I just want you all to rest with the notion that I won’t have to scale a flight of stairs just to visit the loo anymore.

The demo aspect of the bathroom complete, my aunt and I began the exciting process of tiling. Honestly, it was mostly all her. But I supervised. Ok, I was watching and handing her tools and I got to put a few tiles in and measured things. This is the point in the project where things have taken a sharp turn from “Hideous Pit of Nothing” to “Starting to Look Like a Real Room Again.” Lemme show ya. 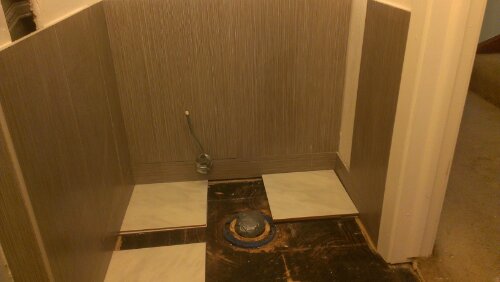 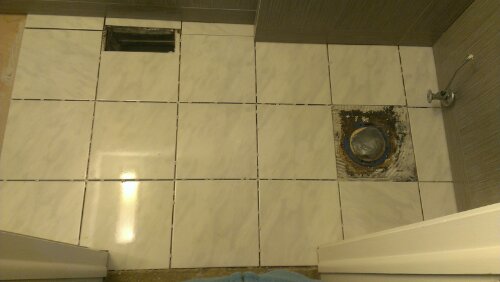 I am so deeply in love with the wall tile that I wish I could put it everywhere.  We have a new toilet, and a new vanity picked out. Once it’s done, you are all welcome to do your business in there.

I’ve talked about our downstairs bathroom before, but last night I had a super not-even-remotely-a-secret meeting with my aunt about it. She offered ever so sweetly to help me rehab the bathroom as my Christmas present. She has insane amounts of experience with this stuff. She and her siblings are basically gutting and redoing an entire house for their parents. They added a second floor all on their own! So yeah, I’m gonna take the help.

She has some great ideas and I can’t wait to see what she has in store for me. I was too afraid to tackle that vanity top, but she says it’s out of here! 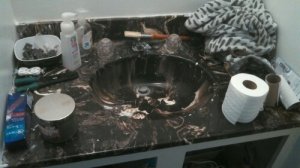 I showed her the towels and hardware I bought for my little plan so those will be the springboard for the design. She is the kind of person who can envision a room and execute it perfectly. Actually, all my aunts are that talented. I’m a very lucky neice. So stay tuned for the revision of my bathroom plans!

I started this blog a little more than 4 months ago to document my journey from woman-child (like man-child?) to adult. It has also been a  good reminder of all the things I’ve actually finished because I tend to get bogged down by what still needs to be done. So I’m going to share with you a few gems from the last year and a half I’ve lived here. Let’s begin with my crowning glory: the master bath.  In the summer of 2011, I packed up my stuff and moved in with my man. We share the master bedroom and we get our own bathroom. For someone who has shared bathrooms with 5 other people per household, that’s bordering on a miracle. The kicker was that the bathroom had only one working feature – the sink. So that means no shower, and no toilet. They were both out of commission.  What’s the point then?  The bathroom also featured this wallpaper: 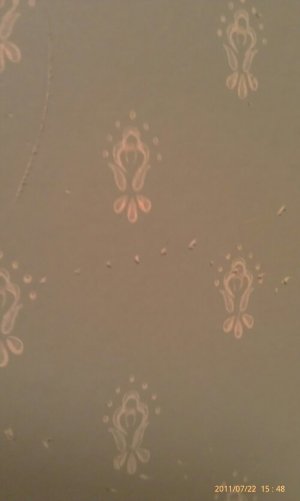 I wasted no time in attempting to tackle that wallpaper to the ground and send it packing. Then I discovered that whoever put up the wallpaper chose not to prime the walls before. Each color on the wall is a different layer. The yellow is adhesive, the white is mud where the drywall comes together, the brown in the ripped paper front of the drywall and the blue is the Dif wallpaper spray staining the drywall. 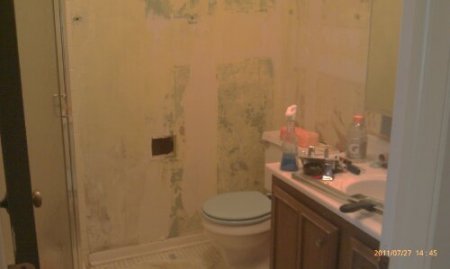 Once I realized this, I had to stop.  This was way above my paygrade. We had a painter come in to remove the wallpaper and fix up the walls and he did a great job. Then our landlord (aka my bf’s dad) hired a contractor to fix everything else.  We have a new shower stall, sink, toilet, vanity, medicine cabinet and tile. Literally everything in the bathroom is new.  This bathroom is lightyears ahead of what it used to be. He also repaired our kitchen ceiling that had been damaged by water from our master bath as well. 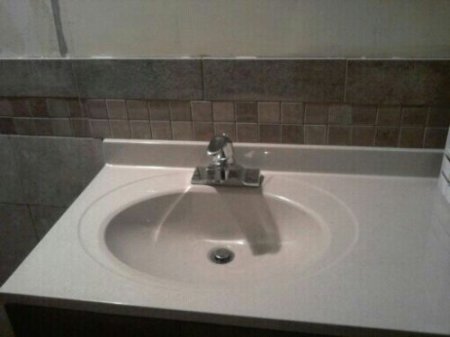 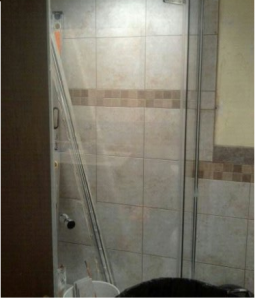 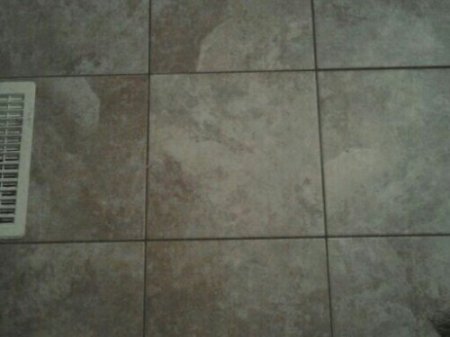 We’ve since painted the walls a happy green (although I was going for a sageish green so I might repaint). Now that you’ve reveled in the glory that is the baster bathroom, I would like to share with you the results of hiring a crappy contractor. The man that rehabbed my bathroom did a WONDERFUL job.  The contractor that was hired before him was absolutely terrible. He rehabbed the shared bathroom upstairs.  The only think that was done well was the tile, which he hired someone else to do. About a week after he “finished” the bathroom, I came home to water dripping from my living room ceiling.  The ceiling looked as if it was going to cave at any second.  I poked a hole in the distended ceiling and let the water fall into a bucket. We thought it was a plumbing issue so we called a plumber.  He promptly cut a hole in our ceiling and told us nothing was wrong. SOMEONE didn’t caulk around the bathtub.  All 4 of our shower water was pooling under the tub and leaking into our neighbor’s house as well. So we were left with this: 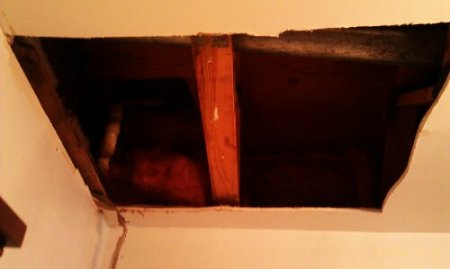 The same painter who fixed my bathroom walls came and patched the ceiling, leaving us with this: 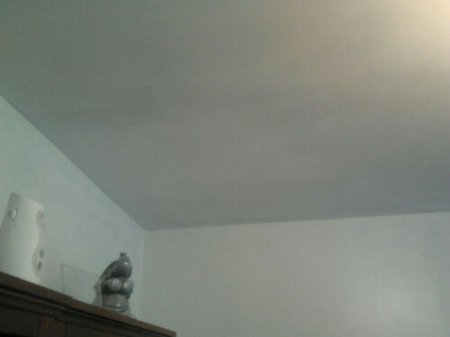 It looked so much better, but I was still disappointed that it had to happen at all. What would have cost us $5 to fix ended up costing us hundreds. All because of one man’s negligence. In the end, I’m glad we now have fully functional bathrooms and ceilings, but it was quite a journey.  We started with 2 of 3 toilets operational and basically no shower to 3 functional if not super visually appealing bathrooms.

After the painting is complete (full pics up soon), we will be taking charge of the bathroom on the first floor.  When we first moved in, it was the only bathroom in the house that was completely functional despite it’s lack of visual appeal.  Once our other 2 bathrooms were serviceable, meaning both the showers and both the toilets worked, we finally took it upon ourselves to get down to business (pun intended) in the downstairs baño.  It’s the bathroom people use when we have guests over so I’d like it to be nice. I don’t want my friends and family wondering if they should get a tetanus booster after leaving my house. Right now it’s kind of rough in there. 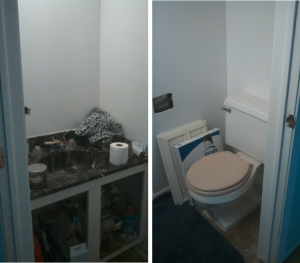 We went ahead and have been refinishing the walls ourselves.  Please note this is not something you should try without doing a lot of research before.  I am going to be completely honest and tell you that I was way too impatient not to do this my way.  We picked up some DAP spackle that specifically says not to use it for skim coating. Once again, I’m incredibly independent/foolhardy. My sister spackled and sanded, then covered the walls with bonding primer.  Then she repeated those steps. I’m going to repeat them tonight to finish it off. The walls are definitely improved.  She did a great job of fixing the difference in thickness between the areas where the wallpaper ripped the drywall and the rest of the wall.

The walls are nearly completely smooth.  I think they just need one more once over.

In preparation of having a bathroom I can be proud of, I also painted the gold mirror frame to freshen it up. What color? You shall see. 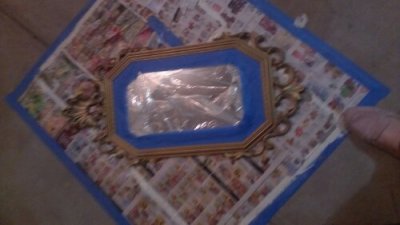 After painting the mirror frame, I also painted the cabinet with some paint we had left over from the basement (Bone Folder by Martha Stewart) and sealed it for wipeability.  The cabinet was a dark brown and it wasn’t working for me. I like bathrooms to be light and fun.  I know you saw the sink. It’s hard to miss. I don’t think it’s in the budget to replace it right now and I’m not sure about using countertop paint on it so it’s staying – for now. I also bought some new hardware for the cabinets.  I could not take the weird distressed brass/gold thing going on in there so brushed nickel it is!  My aunt is going to show me the tiling ropes so hopefully we can pull this bathroom into modern times together.

Do you have any major projects on your agenda? Think I can tackle this? 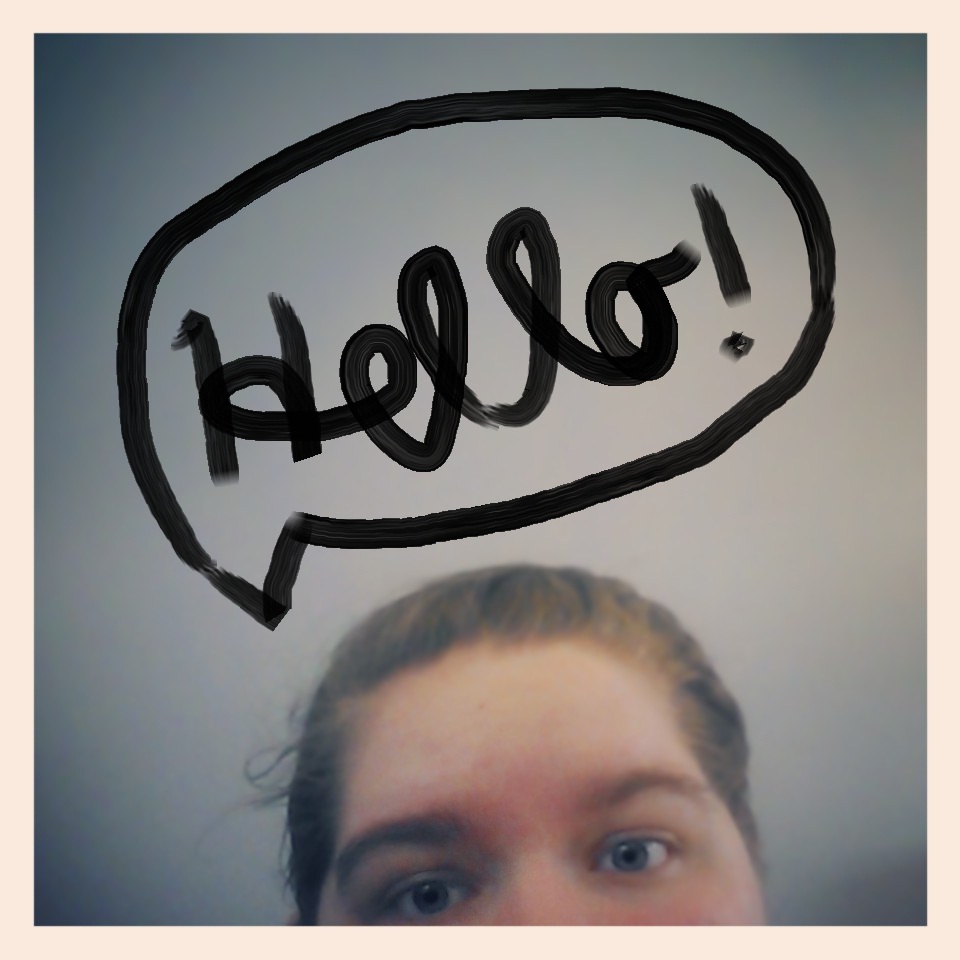